Archive for the ‘science fiction’ Category

A microalgae lamp that absorbs CO2!

Wow! So the future is safe? But here is the bad news that it ‘may’ encourage deforestation! these microalgae-powered lamps, invented by French biochemist Pierre Calleja, could absorb a ton of carbon from the air every year. That’s as much as 150 to 200 trees.

First of all I want to apologise to you all,since I haven’t written any posts these days because of the busy schedule and lot of assignments.Now that I am back,I am continuing the topic which is the “Time travel”.I would also like to suggest you to go through my previous time travel blog,because that understanding will help you a lot…

The second way of time travelling is by speed.

SPEED:You may be wondering how can speed influence the topic we are discussing.Right? Let me tell you that mass which we discussed earlier directly co-relates with the speed.Coming to the topic,imagine a train which can really travel with tremendous speed,like speed of light(experimentally this is not possible,but just imagine)

hm….that can be any vehicle,even a car!!Now assume that the passengers have boarded a train in a station, and the train moves with the speed of light.The duration of the time inside the train will be less than the duration of the time outside i.e.,the outside world.For better understanding,I will recommend you to refer my previous blog Time Travel-1,where I have explained this kind of explanation briefly.Because I have already said that speed and mass are inter-related,so just replace the term mass with speed…and you also need some common sense..!!Never mind just kidding…

So,that’s nothing but time travel.Let’s assume that the train left a station 1hr ago for “us”.And it has returned.Then the time duration may be an hour for us but the time duration for the passengers will be not even 15min…!!!As I suggested you earlier,refer to my previous blog.There is resemblance between the two,so you can grasp that easily.

so,the extent of time travel is directly proportional to the speed.

There is only one other way remaining which is quite popular.You can just google it and search…because there are many,many sites which can make you really go deeper into that…that would make you a little comfortable to understand with all the video stuff..

For better command on the topic..i.e,time travel by wormholes,I suggest you to visit Youtube and other video sites, where you can get lot of videos regarding the time travel.

When I saw and knew about the time travel I too got too excited about it.Now that I know about the basic science about the space travel, I am going to share with you guys in series of  parts about it.I am going to discuss it in detail.Because it takes a lot of explanation(so the post becomes too big)I am going to write in parts.

There are many ways to time travel.Some of the ways are….

Difference in the mass:Yes,time travel can happen by the variation of  masses(huge amount of mass).Let me make you understand about it.Consider a big and massive object like a massive star.Let me compare time ,when you are near to a star and when you are in open space then the duration of the time is less i.e.,at that moment 1sec < 1sec.I mean the duration of the time decreases.Now let me give you an other example,this will make you understand about it clearly.Now, I am keen to consider earth into consideration.Take the earth,moon system.When you are on earth,then 1hr=1hr,but when you are on moon, 1hr is less than 1hr(YOU MUST UNDERSTAND THAT HOUR,MINUTE AND THE OTHER UNITS ARE ONLY THE  MEASURABLE UNITS WHICH WE HAVE GIVEN FOR OUR CONVENIENCE) this is because of the higher mass of the earth and the lower mass of moon.Got my point now..?You must understand that the time difference is very very tiny,its like millionth of a second.May be very less,but that too counts!!I will tell you the reason.Though the time variation is too less but,because the distance between the earth and the moon is very high the GPS positioning may have an error of about 8-10 kms(Taking the GPS system as example)

I guess its hard for you to digest.Right?You may disagree with me but,its true.Let me give you a live example.Consider our earth,satellite system.Because of the time variation which I have told you now its difficult for the GPS satellites to track us because of the time variation on earth and in the space.So a resetting programs are done so that we get as small error as possible(for letting you know your position the satellite counts the time taken for the signal to reach you which varies because of  the mass and the distance between it and the earth)

So to conclude simply,the astronauts who return are the time  travellers,because they went to space and there the time proceeds slowly…..i.e., if you consider two persons (one astronaut and a common man on earth ,born on same time,date and year) then the astronaut is a bit younger than the guy on earth by quarter of a second depending on the time which he was in space!!

SO the astronaut is younger by less than a second..!!!Very interesting right?

The first part was difficult for me to explain,but the remaining parts are a bit easier for both writing and for you to understand.

Hope you have a nice experience reading the mysteries of time.

YOU MAY STOP READING THIS BLOG WHEN YOU LOOK THE EXAMPLE,BUT READ IT COMPLETELY SINCE THE CONCLUSIONS REST AT LAST.YOU CAN ALSO LOOK OUT FOR SOME COOL CONTRADICTIONS THAT GRAVITY DOESN’T EXIST.AND ALSO CHECK OUT WHERE NEWTON WENT WRONG….!!!!

You must have already got a thought whether I have gone mad or what….hm,I haven’t gone mad at all.Truly speaking, gravity doesn’t exist at all.

Gravity is not itself a force of any kind, gravity is simply a dynamic response to the condition of field.hm…hard to digest?  I’ll make this very simple.

Consider a big stretched membrane ,which has a heavy ball on it.Now place a coin and leave it.You will observe that the coin would be revolving around the heavy ball in the same way as the earth and other planets revolve around the sun.I think this demonstration  has been quite  easy,right?

Let us apply this to the gravity thing.Consider the space as the stretched membrane,but in 3 dimensions.Here is picture  to make it easy for you.

I think it's a bit easier for you to imagine now...but do that in 3 dimensions.

The planets revolve around the sun not because of the gravity.Its the same reason why the coin revolved around the heavy ball you kept in the above demonstration.

Not convinced…?? That’s not a problem, its obvious! Now, I am gonna give a cool contradiction that gravity don’t exist. For that we need to get into some basic physics(it’s just basic…don’t panic!!)consider our earth,sun system.Assume that earth is revolving around the sun,now imagine that sun has collapsed suddenly!! Then according to the maths and physics Earth should move in the tangent direction almost immediately.Here arises a contradiction,when the fastest in the universe,light, is taking about 8 mins to reach Earth, how come Earth move in the tangent direction almost immediately?…because it must move in the tangent direction after a minimum time of 8 min, as the fastest in the universe i.e., light is itself taking 8 min ,right? Got my point now..?

Truly speaking this question was raised by Einstein and he was the one who first realized that,this gravity concept was not 100% clear.So wanna know where Newton went wrong?

Here is a quite simple explanation……Now just come again to this experiment,now that I have told you about this membrane concept you got my point…but,when you haven’t got a membrane thing and saw the coin moving around the heavy ball,its obvious that you would think that there is some invisible force binding this coin and the heavy ball…right? That’s what must have happened with Newton too!!…so what ever forces we have named are nothing but the force generated due to the reason that space can bend….like the membrane,in this case did…

So if you want the complete universe to be put into the picture,then the same concept applies.Here is a  cool picture for you. 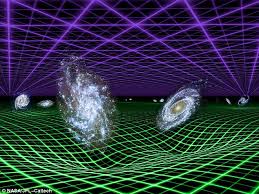 Same application in a larger scale.

From the advanced theories like “The Theory Of Every Thing” this explanation to gravity has got a reasonable support.It too suggests that this can be possible.

So,then why this concept isn’t in our text books yet? That’s because the consequences and the applications of this is quite unimaginable.Here is a small example for you.If this thing really possible then the consequences would be in such a way….You can be in different places at one time..!!That’s one of its conclusion which is quite odd and cannot be experimented,right? It’s like you are in a park,home,play ground etc..in one time!!!! That’s quite odd,right?

It’s really possible to get into a conclusion if more and more scientists work on it.But why aren’t they doing that.Because they cannot risk their entire career for this odd theory.You know how can a person be in different situations at a time?!!

SO HERE I COMPLETE THIS TOPIC SAYING THAT,”GRAVITY DOESN’T EXIST.IT’S JUST A RESPONSE FOR THE CONDITION.”

In my next blogs, I am gonna write about the “TIME TRAVEL”Don’t miss..!!